It is often necessary to devise a temporary place of safety, such as when evacuating high buildings. This may be defined as a place of comparative safety and includes any place that puts an effective barrier (normally 30 minutes’ fire resistance) between the person escaping and the fire. Examples are as follows:

A staircase that is enclosed throughout its height by a fire resisting structure and doors can sometimes be considered a place of comparative safety. In these cases, the staircase can be known as a ‘protected route’. However, the degree of protection that enables staircases to be considered a place of comparative safety varies for differing building types, and is normally defined in the relevant codes of practice.

Ideally, this should be in the open air, where unrestricted dispersal away from the building can be achieved. Escape routes should never discharge finally into enclosed areas or yards, unless the dispersal area is large enough to permit all the occupants to proceed to a safe distance. (NB: a safe distance equates to at least the height of the building, measured along the ground.) Total dispersal in the open air therefore constitutes ultimate safety. When inspecting any building, it is important always to follow the escape route to its ultimate place of safety. Plus, the final exits on these escape routes (i.e. fire exits) must have sufficient capacity to ensure the swift and safe evacuation of people from the building in an emergency situation.

What is the Total Width of Fire Exits Required?

There are two main sources of guidance that should be consulted when considering the above question for your premises: the Building Regulations and British Standards.

Current building regulations contain guidance on the widths of escape routes and exits for new-build, non-domestic properties and the communal areas in purpose built blocks of flats in “The Building Regulations 2010, Fire Safety, Approved Document B, Volume 2 – Buildings Other Than Dwellinghouses, 2006 edition, incorporating 2007 and 2010 amendments”.

The following information is extracted from page 37 of the above document:

3.18: The width of escape routes and exits depends on the number of persons needing to use them. They should not be less than the dimensions given in the following table:

3.20: Widths of escape routes and exits

In calculating exit capacity, the document notes the further points:

3.21: If a storey or room has two or more storey exits it has to be assumed that a fire might prevent the occupants from using one of them. The remaining exit(s) need to be wide enough to allow all the occupants to leave quickly. Therefore, when deciding on the total width of exits needed according to the above table, the largest exit should be discounted.

The current BSI “Code of practice for fire safety in the design, management and use of buildings” (BS 9999: 2008) takes a complementary approach to this calculation, based on two main factors: occupancy characteristic and fire growth rate. Combining these two factors creates the risk profile of a specific building. This means that, rather than the prescriptive formula evident in earlier BSi publications on the matter, there is scope for a much more interpretative approach, on a case by case basis, which takes into account the specific features of an individual building. This is especially significant when considering the issue of escape routes and fire exits in existing premises, particularly if they are of an historical or heritage nature.

The occupancy characteristic is principally determined according to whether the occupants are familiar or unfamiliar with the building (i.e. the difference between emergency and panic exits) and whether they are likely to be awake or asleep.

Page 26 of the Standard contains the following table (numbered 2 in the document):

The fire growth rate is estimated according to the nature and quantity of combustible materials in a specific building, as follows:

Examples of the risk profiles created by combining occupancy characteristic and fire growth rate include the following (BS 9999:2008, p 28):

At pp 82/83, the document notes that the minimum door widths according to risk profile and when minimum fire protection measures are provided are as given in the table below. This is with the provisos that the total door width should be:

a)      not less than the aggregate of the exit widths given in the table;

As with the Building Regulations, the British Standards guidance assumes that, if a storey has two or more storey exits, a fire might prevent the occupants from using one of them. Therefore, the remaining exit(s) need to be wide enough to allow all the occupants to leave quickly.

It will be noted that this example indicates that a larger maximum number of persons (236) can be accommodated by an exit width of 850mm in a building with a low risk profile than as stated in the Building Regulations table above (110). This would suggest that the Building Regulations estimate is based on the worst case scenario from the point of view of fire growth rate.

The Process of Escape

Having considered the factors that will influence escape, and having seen how these can be related to the risk profile and / or occupancy levels of a specific building, it is important to look at the stages in the process of escape and the maximum distances people can be expected to travel.

Escape is generally considered in four distinct ‘Stages’ as follows

Stage 1 – escape from the room or area of fire origin

Stage 4 – escape at ground level away from the building.

It is important that each floor plan of a building indicates the shortest route(s) to a place of comparative or ultimate safety should an emergency evacuation be triggered, e.g. by the sounding of the fire alarm. The width of final exit doors and the escape routes leading to them will dictate the maximum number of people who can safely occupy that floor or a specific area within it under normal conditions of operation. 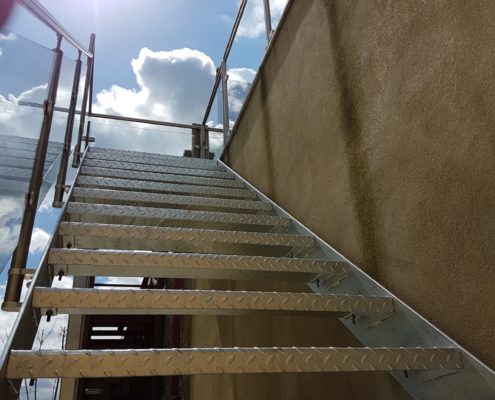 One of the most important aspects to consider when designing and constructing a building of any type is to ensure adequate means of escape in the event of a fire.

This is particularly important for multi-storey buildings and those with high occupancy.

Approved Document B states that there must be a “sufficient number of adequately sized and protected escape stairs” for evacuating the building. It details the various ways to meet the relevant requirements.

One thing to note is that both British Standards and Building Regulations require a certain number of viable exits with the assumption that the path to one exit is blocked by the fire. This is an important consideration when deciding where and how many fire escape stairs are required.

Regulations for fire escape stairs are covered by various documents, including:

The purpose of this page is to allow you to understand the basics of means of escape and not how to design a means of escape from fire. There are many considerations, not covered here, in planning means of escape, but it will give insight into emergency escape routes and final exit doors, otherwise known as fire exits.

What is a Fire Exit?

The Regulatory Reform (Fire Safety) Order (RRFSO) 2005, which came into force in October 2006, charges the responsible person(s) in control of non-domestic premises with the safety of everyone, whether employed in or visiting the building. Under Article 14 of the RRFSO, this duty of care includes ensuring that “routes to emergency exits from premises and the exits themselves are kept clear at all times” (14: 1) and that these “emergency routes and exits must lead as directly as possible to a place of safety” (14: 2: a). In other words, the entire escape route up to and including the final exit from a building must remain unobstructed at all times, while the distance people have to go to escape (the travel distance) must be as short as possible.

In terms of fire safety, the final exits on an escape route in a public building are known as fire exits. They may or may not be located on the usual route of traffic when the premises are operating under normal circumstances.  The final exit doors should open easily, immediately and, wherever practicable, “in the direction of escape”, i.e. outwards into a place of safety outside the building. Sliding or revolving doors must not be used for exits specifically intended as fire exits. The emergency routes and fire exits must be well lit and indicated by appropriate signs, e.g. ‘Fire Exit – Keep Clear’. In locations that require illumination, emergency lighting of adequate intensity must be provided in case the normal lighting fails, and illuminated signs used. This is because, as noted in the HM Government publication “Fire Safety Risk Assessment: Offices and Shops” (May 2006): “The primary purpose of emergency escape lighting is to illuminate escape routes but it also illuminates other safety equipment”.

This site uses cookies. By continuing to browse the site, you are agreeing to our use of cookies.

We may request cookies to be set on your device. We use cookies to let us know when you visit our websites, how you interact with us, to enrich your user experience, and to customize your relationship with our website.

Click on the different category headings to find out more. You can also change some of your preferences. Note that blocking some types of cookies may impact your experience on our websites and the services we are able to offer.

These cookies are strictly necessary to provide you with services available through our website and to use some of its features.

Because these cookies are strictly necessary to deliver the website, refuseing them will have impact how our site functions. You always can block or delete cookies by changing your browser settings and force blocking all cookies on this website. But this will always prompt you to accept/refuse cookies when revisiting our site.

We fully respect if you want to refuse cookies but to avoid asking you again and again kindly allow us to store a cookie for that. You are free to opt out any time or opt in for other cookies to get a better experience. If you refuse cookies we will remove all set cookies in our domain.

We provide you with a list of stored cookies on your computer in our domain so you can check what we stored. Due to security reasons we are not able to show or modify cookies from other domains. You can check these in your browser security settings.

These cookies collect information that is used either in aggregate form to help us understand how our website is being used or how effective our marketing campaigns are, or to help us customize our website and application for you in order to enhance your experience.

If you do not want that we track your visist to our site you can disable tracking in your browser here:

We also use different external services like Google Webfonts, Google Maps, and external Video providers. Since these providers may collect personal data like your IP address we allow you to block them here. Please be aware that this might heavily reduce the functionality and appearance of our site. Changes will take effect once you reload the page.